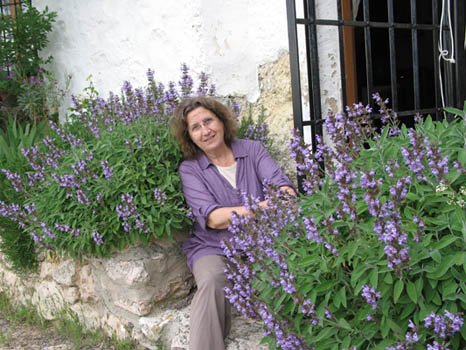 From 1971, when she had her first exhibition in Sala Estudio, Albacete, Spain, her more than 96 exhibitions have been housed in museums, institutions and galleries in Albacete, Valencia, Madrid, Alicante, Bilbao, London, New York, Paris, Venice, Minneapolis, various places in Germany and Holland.
In 2014 she had an anthological exhibition on her 50 years of work in the cloister of Santo Domingo, Chinchilla, Spain. There one could appreciate the different techniques used through the years of professional work: painting (oil on canvas and on paper, acrylic, oil pastels with different types of treatments, collage…), graphic work (silkscreen), stained glass and installations.

In 1987 began working in contemporary stained glass projects. Since 1994 start the collaboration with Derix Glasstudios in Taunusstein, Germany.
Among the other works, in 1998 she created the 27 m² of a stained glass window for the main entrance to the RENFE train station in Gandía, Valencia, and in 2015 the big rosette of the cathedral in the city of Albacete to celebrate the 500th anniversary of the beginning of its construction, both elaborated in Derix (Germany).
She has also installed stained glass windows, doors and different pieces in private homes in Grefrath (Germany), Madrid, Albacete, Valencia, Godella , Paterna, Mas Camarena, Denia, Elche, Castellón… (Spain).

As a Professor of Plastic Arts and Design (1982-2012) in the Escuela de Arte y Superior de Diseño in Valencia she was there the initiator and coordinator for international programs during a period of 9 years. From 1996-2000 she became a member of the Board and of the Executive Committee of the European League of Institutes of the Arts (ELIA), representing Spain among the 350 other European schools of design, fine arts, architecture, theatre, music and dance.

Member of the Executive Board of the Museo de Cerámica Nacional and President of the Asociación Cuevas del Agujero in Chinchilla de Monte Aragón.